Thermal emission of electrons from a filament source (usually tungsten) is used to heat samples to high temperatures. Typically, electron beams are used when required temperatures are too high for thermal evaporation. Magnetic fields and rastering are used to steer the electron beam 270o into metal source. (This is done to allow shielding of tungsten filament and prevent contamination. See image.) Electrons striking metals can produce X-rays which sometimes causes damage to CMOS material layers on a wafer. An annealling step takes care of these problems.

Metal sources (i.e. pellets) are placed on filaments (Tungsten, Molybdenum, Quartz, graphite, etc.). Under vacuum, metals are heated to their melting points via a resistive filament. The liquid metal gives off a vapor the atoms of which have some kinetic energy dependent on temperature. Metal atoms travel in a straight line from the source to a sample. Deposition rates on order of 1 nm/sec are standard. Some contamination may result from the filament being at least the same temperature as the source.

Multiple layers of metals can easily be deposited using either filament or e-beam evaporation. Because alloys contain materials with different vapor pressures, it is difficult to deposit an alloy by evaporation. One method of evaporating alloys is to melt two sources simultaneously in separate crucibles, and control each evaporation rate separately. This can be difficult. A second possibility is to sputter the material.


Semicircular symmetry allows multiple wafers to be evaporated simultaneously. For liftoff applications, a planar configuration is preferred. A rotating planetary can help with uniformity. Maintaining a lower deposition rate will yield greater uniformity. Placing samples far from the source will help uniformity, but will also lower deposition rate. The deposition rate depends on the position and orientation of the wafer in the chamber. An evaporation rate is the rate at which a material will vaporize (evaporate, change from liquid to vapor) compared to the rate of vaporization of a specific known material. This quantity is a ratio, therefore it is unitless. The equation governing evaporation rate is Revap =

. s is the surface tension of the molten source, dHv is the enthalpy of vaporization, and N is Avogadro's number. Note that Pe ~ e-T.
A reasonable deposition rate requires a vapor pressure above 10-2 torr. Refractory metals, such as tungsten, can require temperatures in excess of 3000 degC to reach a vapor pressure of 10-2 torr. Other metals, for example nickel, gold and aluminum, require much less heat. Chart of vapor pressures of various metals

Mean Free Path, for purposes of evaporation, is the distance a molecule travels in a straight line (in vacuum) before its velocity vector is randomized by a collision. MFP = 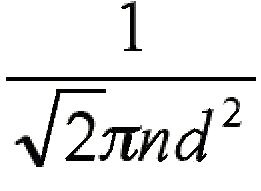 , where n = number of moles and d = molecular diameter. This equation represents the average velocity of the molecules times the average time between collisions. Recalling the Ideal Gas law,

Surfaces perpendicular to evaporation source are not coated. Step coverage describes the conformality of a thin film grown over a feature. The aspect ratio (AR) of a step is defined as AR =

Step coverage can be improved by

In some instances, such as for lift off, it is desirable to achieve zero step coverage. Sputtering will, in general, have superior step coverage (for aspect ratios < .5) as sputtered atoms have random velocities. Evaporated substances tend to be collimated. For high aspect ratios, CVD processes may be used.

Diffusion Pump - high vacuum pumps operating in the range from 10^-3 torr to 10^-7 torr featuring relatively high pumping speed; Diffusion pumps operate by boiling a fluid, often a hydrocarbon oil, and forcing the dense vapor stream through central jets angled downward to give a conical curtain of vapor. Gas molecules from the chamber that randomly enter the curtain are pushed toward the boiler by momentum transfer from the more massive fluid molecules. Removed from high-end applications because of oil vapor backstreaming into the vacuum system and contaminating the chamber. Pressures 10^-5 Torr or lower are referred to as high vacuum (HV). They tolerate operating conditions (e.g. excess particulates or reactive gases) that would destroy other pumps; they have often very high pumping speeds, a relatively low cost, and are vibration and noise free.

Cryo Pump - an efficient, clean, high-vacuum pump operating in the pressure range from about 10^-3 torr to 10^-10 torr; removes gas molecules from vacuum by trapping them on cold surfaces. Roots Pump - Roots pump blades look like two figure-eights which mesh (without touching) and counter-rotate to continuously transfer gas in one direction through the pump. The blades rely on close mechanical tolerance and high rotational speed (often 3600 rpm) to 'seal' the gases. No oil is used in the direct vacuum path, however it is used to lubricate gears. Occasional oil-vapor leaks through shaft-seals prevents the roots pump from being called strictly oil-free. Roots pumps must be backed by pumps that can exhaust to atmospheric pressure. Roots pumps have a relatively low compression ratio, normally less than 5:1. This ratio varys with the molecular weight of the gases since the atoms/molecules of light gases have much higher average velocities than heavy gases. Light gases can move fast enough to repeatedly collide with the blades and travel the short distance (~ 3 or 4") backwards through the pumping mechanism. More information on the workings of high-vac pumps may be found here.

Summary of Pros and Cons to evaporation methods